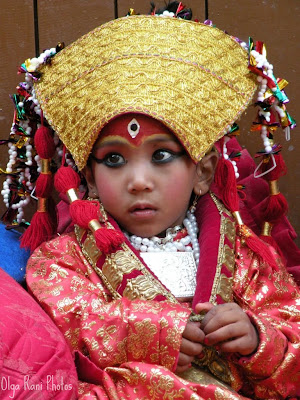 In Nepal there is one Royal Kumari but different Newar communities have their own Kumari also. Kumari is chosen from girls between three and five years old. Kumari candidates must qualify in different signs of physical perfection; any wounds, scars, missing teeth are considered disqualifying factors. Most Kumaris lead an almost normal life with their families but make public appearances in special makeup and jewelry for religious festivals. 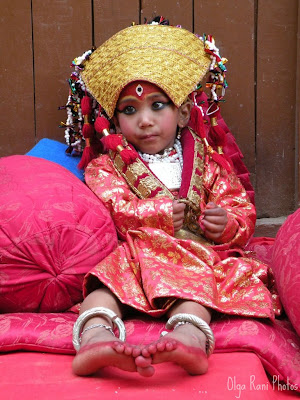 As a goddess, Kumari demands and deserves the most lavish in clothing and jewelry. Her clothes must be red, even for daily wear. For ceremonial occasions some Kumaris wear dresses of red brocade. The special makeup consists of heavily lined eyes and a large area of red on her forehead bordered by a solid yellow line. In the centre is placed the third eye. Her head is decorated with a crown which can be different in style and made of different materials. Kumari also wears square silver jantar, amulet box.
On the photos – 3 years old Kumari of Sankhu, a small town in 17 km from Kathmandu
Email ThisBlogThis!Share to TwitterShare to FacebookShare to Pinterest
Tags: kids, Nepal

I am a Belorussian who lives in Nepal and travels occasionally. Namaste means Hello in Hindi and Nepali. This blog is a visual record of anything that I find worthy to record be it places, people, events or things.